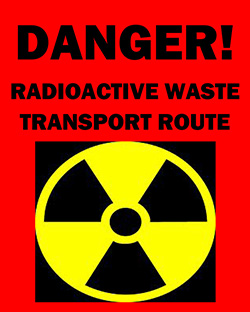 For more than twenty years, the nuclear power industry has had a singular goal for high-level radioactive waste: get it off their property and ship it to someone else’s.

Why? Because as long as this waste–the same toxic stew of irradiated nuclear fuel that spread across the globe from Fukushima and Chernobyl–remains at their reactor sites, the nuclear utilities are liable for any damages. Once the waste is moved from their property lines, we, the taxpayers, become liable for the devastation a nuclear waste accident could cause.

The nuclear industry’s primary aim has not been establishment of a scientifically-sound, publicly-defensible permanent solution for radioactive waste, but rather institution of a “centralized interim storage” site. In other words, one or more “temporary” places to stash thousands of casks of lethal high-level waste, regardless of whether the site is suitable for long-term storage.

And, for more than twenty years, a loud voice of public opposition has stopped the industry in its tracks. In the 1990s, Congress approved a bill to establish such an “interim” site, but President Clinton listened to the public and vetoed the measure, a veto that was upheld by the Senate. In the 2000s, the industry tried to set up a “private” interim dump on Skull Valley Goshute land in Utah, but that deal fell apart. 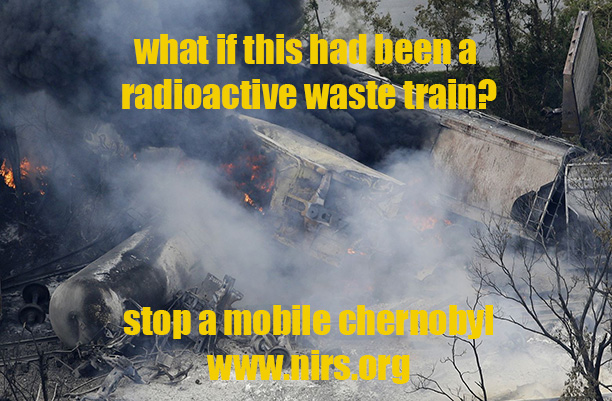 Yucca Mountain, Nevada dumpsite off the table, four members of the Senate Energy Committee introduced legislation (S. 1240) that would have been the first major overhaul of U.S. radioactive waste policy in a generation. And the nuclear industry’s top priority for this overhaul? Centralized interim storage (Nuclear Energy Institute policy brief). But the bill never made it out of committee.

In 2015, with a new Republican majority in the Senate, the nuclear industry and its backers are trying again, with a virtually identical bill. This year, the bill number is S. 854.

An “interim” storage site would begin the transport of tens of thousands of casks of lethal high-level nuclear waste across the entire United States, potentially affecting 100 million Americans who live within a mile or two of likely transport routes–our nation’s roads and railways.

Each truck-sized container would hold up to 40 times the long-lasting radioactivity released by the Hiroshima atomic bomb. The much larger train/barge containers would each hold over 200 times Hiroshima’s long-lasting radioactivity. These shipping containers are vulnerable to severe accidents. Even a fraction of a single shipping container’s radioactive cargo escaping into the environment could prove catastrophic for an entire area downwind and downstream. The U.S. Nuclear Regulatory Commission does not even require them to undergo full-scale physical safety testing! The containers are also vulnerable to terrorist attack, making them massive “dirty bombs on wheels.” 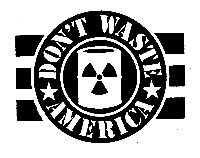 NIRS and its grassroots allies across the country have won tremendous victories in keeping these unprecedented numbers of high-level radioactive waste shipments off the roads, rails, and waterways thus far.

But the nuclear establishment is pushing harder than ever to launch these “Mobile Chernobyls” through our communities, and we need YOUR help in stopping them dead in their tracks. 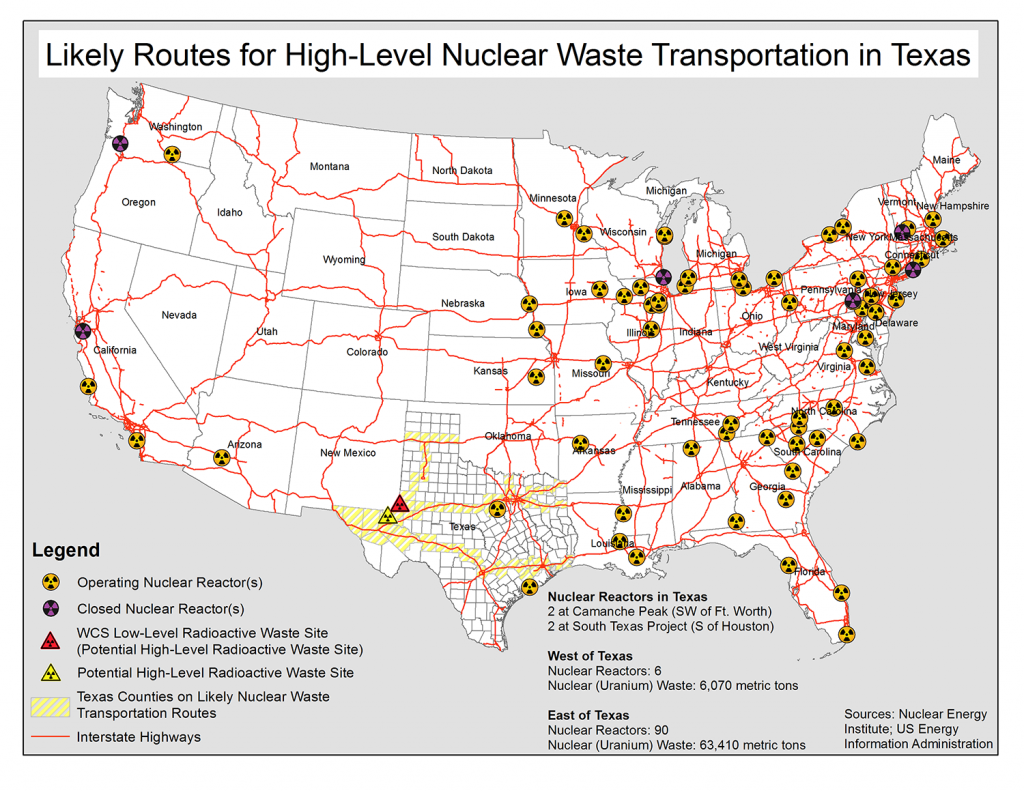 Above is a 2015 map showing likely radwaste transport maps if an “interim” high-level radioactive waste storage facility were built in Texas, as proposed by Waste Control Specialist in that state. The routes would differ somewhat if the site were Yucca Mountain, Nevada.