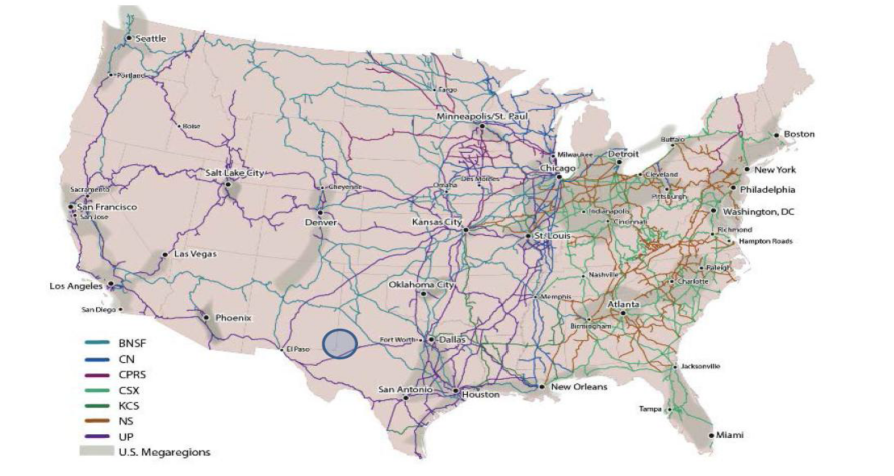 Our Don’t Waste America campaign focuses on preventing decades of massive and dangerous high-level radioactive waste—irradiated fuel from nuclear power reactors—transport across the United States on our rails, roads, and waterways.

Such large-scale transport, which could affect 100 million Americans who live within a mile or two of proposed transport routes, would occur if efforts to revive the proposed scientifically-indefensible Yucca Mountain, Nevada waste dump are accomplished, or if a Centralized or Consolidated “Interim” Storage (CIS) site for high-level radioactive waste is created.

There are two proposed consolidated storage sites for which applications have been submitted to the Nuclear Regulatory Commission.

Waste Control Specialists (WCS), is seeking to expand its existing radioactive and hazardous waste disposal site in Andrews County, west Texas, to include storage of high-level radioactive waste from nuclear power plants across the country. If approved, 40,000 tons of irradiated fuel rods from nuclear reactors around the country could be routinely transported through major cities and farmlands.

In 2016, WCS submitted their license application, but in the midst of the scoping and licensing process in April 2017, requested to suspend review of the application due to “limited financial resources.”  WCS has decided to wait until the company itself is bought out by EnergySolutions, another nuclear waste disposal company based in Utah, but operating at many nuclear processing, disposal, and decommissioning sites in the US and internationally. The US Department of Justice opposed the sale because if the two merged, they would monopolize the nuclear waste disposal industry in most of the US.  The court ruled against the merger . WCS can resume the licensing at its convenience.

Meanwhile, Areva (backed by the French government), one of WCS’s original partners, pulled out and its subsidiary, TN Americas (a cask-maker), replaced it as a partner, with apparently less financial backing. NAC International, another cask-maker, is also a partner.

The other proposed consolidated storage site is in southeast New Mexico. Holtec, partnering with the Eddy Lea Energy Alliance (ELEA), applied to the Nuclear Regulatory Commission (NRC) in March 2017 to store 120,000 tons of irradiated nuclear power fuel.  NRC is reviewing the application, has submitted a Request for Additional Information and several public and at least one closed meeting have been held between the company and NRC.

“Interim” storage is so dangerous because it requires the waste to either move twice (once to the interim site, and then to a permanent site), thus doubling the risks, or it creates the possibility that the waste may never move again, creating a de facto permanent disposal facility at a site that has not been designed or scientifically evaluated for permanent isolation.

Yucca Mountain, Nevada on Western Shoshone land, is technically unsuitable to isolate high-level nuclear waste due to hydrology, earthquakes, and volcanoes to name a few reasons. Former President Obama eliminated the budget for Yucca in 2012. Despite the vast evidence disproving Yucca Mountain’s feasibility as a nuclear waste isolation solution, the Trump administration has decided to revive the plan by dedicating $120 million of its budget to the failed plan.

The solution to the radioactive waste problem begins with ending its generation as quickly as possible. We work non-stop to achieve this goal. For the highly radioactive waste that has already been generated, the goal must be to isolate it as best we can from the environment. The Hardened On Site Storage principles provide a basic plan for reactor communities to build upon as a less dangerous way to manage existing waste. Putting it on trucks, trains and barges and transporting it back and forth across the country to a supposedly “interim” site is an unacceptable risk.

Nuclear proponents are eager to volunteer communities to store the waste and shift liability from the utility generators to the taxpayers, absolving the industry of responsibility for managing the waste it created.  NIRS, other national and regional groups, and our grassroots allies across the count

ry have been and continue working to prevent the generation of more waste and to avoid massive numbers of high-level radioactive waste shipments to “interim” sites and to the fatally flawed Yucca Mountain site.

Twenty years ago, the “Stop Mobile Chernobyl” grassroots campaign was launched to defeat a similar Congressional effort to open Yucca Mountain and establish a facility like what is now called Consolidated or Centralized “Interim” Storage. That campaign ultimately led to President Bill Clinton vetoing the measure, a veto that was upheld by the Senate.

Now, as the Trump administration and Congress push to revive the nuclear threat to Yucca Mountain and to legalize Consolidated or Centralized Storage sites, it is our duty to raise our voices and let them know we are here, we are watching, and we are standing together nation-wide with one clear message: NO, DON’T WASTE AMERICA!