Consolidated (or Centralized) “Interim” Storage (CIS) facilities would be sites to which high-level nuclear power waste would be moved “temporarily” before being shipped to a currently non-existent permanent repository. The waste is and was made and stored at nuclear power reactors since the 1950s in water-filled pools and dry storage casks. If CIS facilities opened, some of the waste would be  shipped from nuclear power sites all over the country to additional nuclear sacrifice areas. There, the waste would be stored in the same containers as at the reactors.  As of 2020, there are two proposed CIS facilities in Andrews County, Texas (Interim Storage Partners/Waste Control Specialists) and Lea County, New Mexico (Holtec International). One was licensed by the Nuclear Regulatory Commission and one licensed but never-opened site in Tooele County, Utah. In the 1960s, waste was brought to a never-opened reprocessing site in Morris, Illinois where it is still wet-stored in a fuel pool.

The waste is in the form of irradiated (“spent”) nuclear fuel assemblies comprised of hundreds of pencil-thin rods filled with uranium and dozens of other dangerous radioactive  elements formed in the reactor core, millions of times hotter than the uranium fuel that goes into nuclear reactors. Unshileded, it gives a lethal dose for hundreds of years. At the reactors, it is stored in deep water-filled pools and dry-storage casks.

A Consolidated “Interim” Storage site would be a place to which some of this intensely radioactive waste would be brought, with the unenforceable commitment that it will move again some day. These facilities would require the shipment of commercial irradiated fuel from all over the country to an additional nuclear sacrifice area.

Consolidated  sites are dangerous short-term non-solutions for several reasons. If consolidated sites are opened, the irradiated nuclear waste would be transported more than once through our communities–once from the reactor site, where the waste is currently stored, to the centralized site, and once more from there to the permanent repository. The transport of irradiated nuclear waste is extremely dangerous and risky. To reduce risk, the waste should be transported only once: from the reactor site (the site of creation) to a morally and scientifically sound system for permanent isolation.

Shipping high-level waste poses the threat of creating a national sacrifice zone if an accident were to occur during transport or at a CIS facility. Land, water, and air within 50 miles or more of the accident site could be threatened by dangerous, possibly uninhabitable, levels of contamination.

There is also the possibility that an “interim” site could become a de-facto permanent storage site if a morally and scientifically sound permanent system to isolate the waste is not developed. This is particularly troublesome because centralized facilities are not designed to store irradiated nuclear waste for the millions of years it remains radioactively dangerous.

Consolidating irradiated nuclear fuel could lead to reprocessing which makes the nuclear waste problems even worse and leads to increased nuclear weapons proliferation dangers. No reprocessing sites have ever been cleaned up…they are costing billions to prevent from getting worse.

The Nuclear Waste Policy Act states that a centralized facility can only be constructed if a permanent repository is operating. Furthermore, the portion of the law that allows for temporary storage sites has expired, deeming any such facility illegal under existing law.

Despite the illegality of temporary nuclear waste storage sites, two private corporations have begun the licensing process to open centralized storage sites. One is on hold but could resume at any time.

Groups wrote to the NRC arguing that it is illegal to even consider a Centralized storage license application, but the NRC is proceeding regardless.

One is being proposed near Andrews, Texas by the Waste Control Specialists.  Their application was declared complete in January 2017, but in April they submitted a request to the NRC to suspend the licensing process until they are officially acquired by EnergySolutions.  The other is being proposed in Southeastern New Mexico by Holtec International in conjunction with the Eddy Lea Energy Alliance.

These corporations are moving forward with license applications because they are hopeful the laws will change to allow:

1. The shift of liability and ownership of the high-level waste from nuclear utilities that generated and own it to the US Department of Energy (and thus US taxpayers);
2. The construction of the facilities before the selection and licensing of a permanent repository.
3. The use of Nuclear Waste Fund money collected for permanent disposal to be allowed for so called “interim” storage. 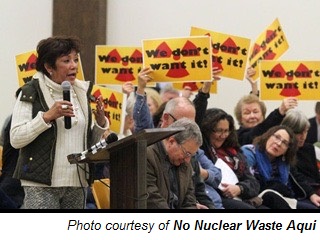 Today New Mexicans and Texans are fighting the attempted licensing of the two proposed CIS facilities–Waste Control Specialists near Andrews, Texas and Eddy Lee/Holtec International east of Carlsbad, New Mexico. These sites, and any transport to these sites, are not only dangerous, but environmentally unjust. These sites present clear examples of environmental racism.

New Mexico’s demographic is largely Latinx. There are many communities of color, especially in the southern part of the state where the sites are being proposed. People of color would be disproportionately affected if the Eddy Lee/Holtec CIS site were licensed and constructed.

New Mexico and Texas do not consent to either proposed CIS facility and are fighting to avoid the environmental injustice and the unnecessary shipment of irradiated high level nuclear waste through their communities.