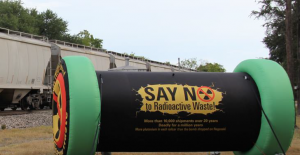 The Nuclear Regulatory Commission (NRC) may complete a Safety Analysis and the Final Environmental Impact Statement by the end of this month for an application to store deadly nuclear reactor waste in Texas. Despite strong local, state and national opposition, the NRC could license the facility within the following 30 days.

The proposal by Interim Storage Partners (ISP – a joint venture of Waste Control Specialists (WCS) and ORANO) would allow importation and storage of 40,000 metric tons of high-level radioactive waste from nuclear reactors across the country. The deadly waste could travel through major cities and ports, headed to Andrews County in West Texas. It would be stored above-ground for decades at WCS’ existing low-level radioactive waste site. Another company, Holtec, Inc., seeks an NRC license to store 173,000 metric tons of spent nuclear fuel in nearby New Mexico.

If the licenses for these proposed high-level radioactive waste facilities are approved, unprecedented mass transport of spent nuclear fuel could occur, in a process lasting decades. A single rail car could carry as much plutonium as was in the bomb dropped on Nagasaki. The capacity of the two sites exceeds the entire amount of existing U.S. nuclear reactor waste, as well as all that’s projected to be produced in the future. A State of Nevada study found that clean-up of radioactive contamination from an accident could soar as high as $9.5 billion for just one square mile of a downtown area.

Importing high-level radioactive waste to either site would risk the health and safety of our children and future generations. There would be increased risks of transportation accidents, leaks or sabotage along the nation’s transportation routes. Exposure to radioactivity can cause various cancers, genetic damage, birth defects and even death.

Legal action is also underway. Parties opposing WCS licensing include SEED Coalition, Sierra Club, Beyond Nuclear, Leona Morgan, Fasken Oil and a coalition of oil royalty owners. Most of these cases are now on appeal at the U.S. Court of Appeals for the DC Circuit.

Opponents will continue to fight high-level radioactive waste storage in Texas and New Mexico., even if the NRC licenses one or both facilities. A Monitored Retrievable Storage facility for high-level radioactive waste was to be run by Private Fuel Storage at the Skull Valley Indian Reservation in Tooele County, Utah. It was licensed by the NRC, but never constructed.

In Texas, STP 3 & 4 nuclear reactor units were licensed, but were never built. Opponents claimed that nuclear construction costs would be too high, especially with wind and solar energy becoming readily available and increasingly affordable. These turned out to be key factors in the cancellation of that project.