Proposals from the White House and Congress would invest up to $50 billion dollars in subsidies for aging, uneconomical nuclear power plants over the next decade. A new report by economist and consumer advocate Dr. Mark Cooper shows that these subsidies for nuclear energy would undermine the goals of President Biden’s infrastructure and climate plans. In contrast to renewables, subsidizing aging nuclear reactors and other false solutions would obstruct the transition to a zero-emissions energy system and squander the economic and environmental benefits that such a transition would yield. 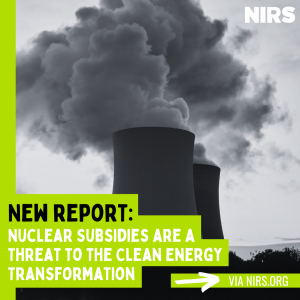 Dr. Cooper’s report concludes that the best investment for climate, jobs, and the economy is in a rapid transition to a renewable, modern energy system, phasing out nuclear power along with fossil fuels. Focusing on the transition to 100% renewable energy will feed a virtuous cycle of job creation, climate protection, technological innovation, and cost reduction.

“Dr. Cooper’s report shows conclusively that subsidizing nuclear power will compromise President Biden’s goals for the American Jobs Plan,” said Tim Judson, executive director of NIRS. “Billions of dollars for old nuclear power plants will block renewable energy and real solutions to climate change. It will not create a single new job, and prevent the creation of thousands more jobs. And it will prolong racial and economic injustice, subsidizing radioactive waste while keeping energy costs high. We can create a just, equitable, thriving economy and solve the climate crisis by investing in renewable energy and modernizing our electric grid, but not if we keep bailing out nuclear energy.” 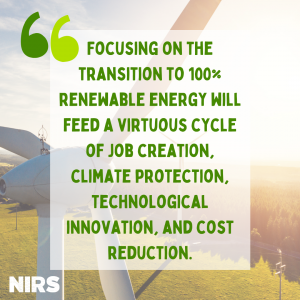 Our elected leaders must seize the opportunity to create a better, cleaner, more equitable energy future and not sacrifice the economy and the environment to nuclear bailouts. Send a message to your members of Congress, President Biden, and Vice-President Harris telling them to say NO to nuclear bailouts and YES to a prosperous economic future, climate action, and environmental justice.

Take action for a thriving, just, and equitable clean energy future and tell the Biden Administration and Congress: “No Nuclear Bailouts in – We Need 100% Renewable Energy by 2035!”