When a campaign strikes a nerve · NIRS 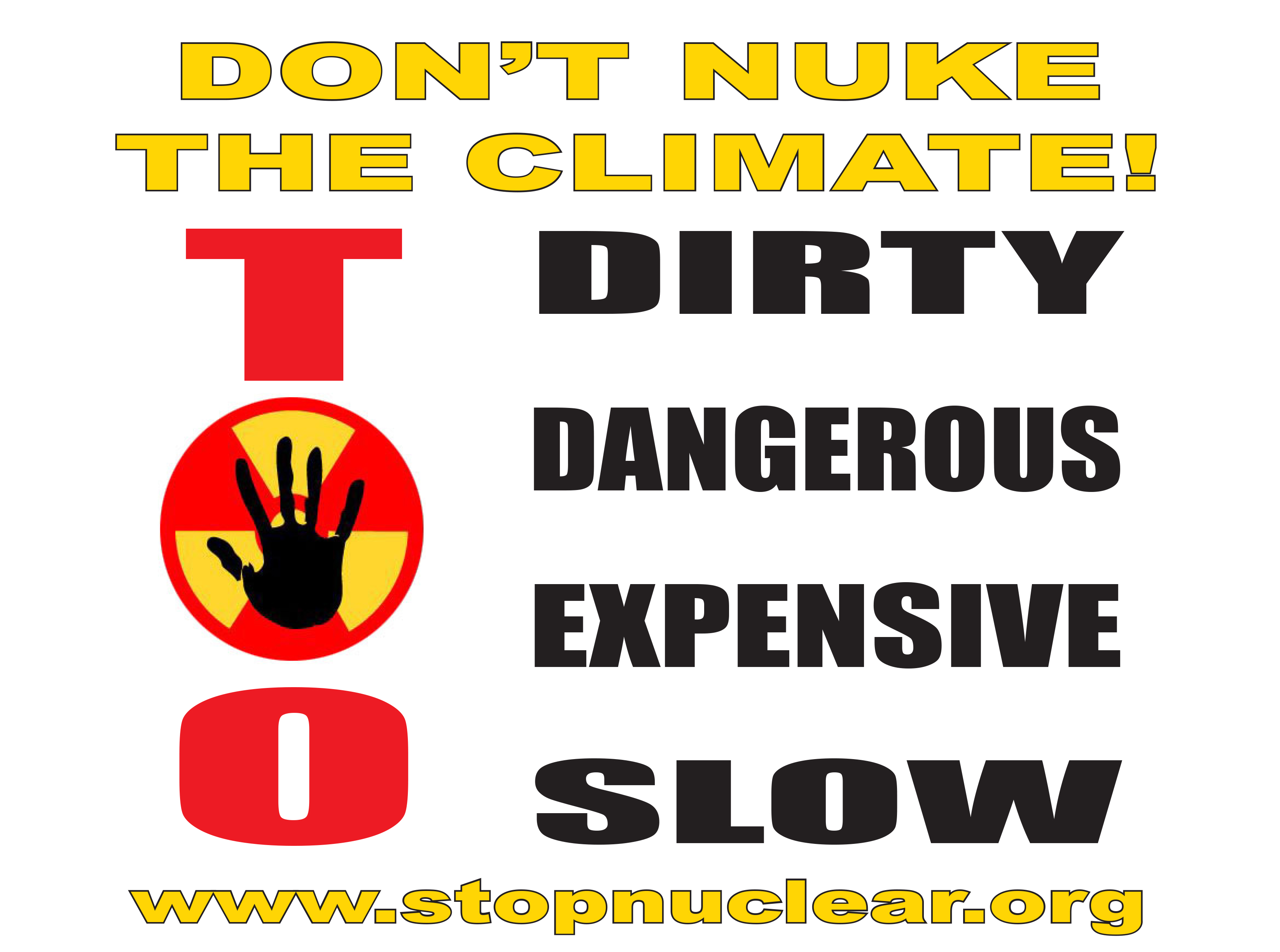 Every successful campaign for social change causes reaction. After all, if the campaign weren’t hitting at vested interests, weren’t causing disruption for some entity, then there would be no need for a campaign–its goals would simply be adopted by acclamation.

Thus, it’s always a source of initial gratification when, after launching a new campaign, reaction sets in. When you can see you’ve struck a nerve. When your opposition attacks you directly. And that high point is elevated further when the best attack your opposition can muster is one against the least important of your arguments.

So it is that the international Don’t Nuke the Climate Campaign, for which NIRS is the U.S. member, last week began feeling that warm gratification, that recognition that we are beginning to have an impact. Because we’ve been attacked by name for the first–but surely not the last–time.

A small group of Finnish people, who call themselves “ecomodernists” and are affiliated with a group called Energy for Humanity have taken it upon themselves to launch the first direct attack on the Don’t Nuke the Climate campaign, in an essay titled A Most Unwise Campaign.  The essay appears to be a follow-up to a self-published tract called Climate Gamble: Is anti-nuclear activism endangering our future? They’re planning to distribute 5,000 copies of these at COP 21 in Paris over the next two weeks in an effort to promote nuclear power and beat back our campaign.

Following the distorted and factually-challenged logic of James Hansen,  the group begins by repeating the familiar argument that renewable energy cannot scale up fast enough to solve the climate crisis, that decarbonization of the world’s power supply isn’t happening quickly enough, and that, ergo, we need a massive amount of new nuclear power.

What does “massive” mean? The authors don’t say, but the World Nuclear Association is less shy: today it issued a statement calling for 1,000 Gigawatts (about 1,000 large reactors) of new nuclear power by mid-century.

More on that argument in a minute.

The essay then shifts gears to focus on one issue: the carbon footprint of nuclear power, which it calls our “key argument.” Actually, it isn’t. Indeed, we readily admit that nuclear power is a low-carbon energy source when compared to fossil fuels. We assert that it is high carbon compared to renewables, but really, that’s all relative. And while the essay devotes considerable effort to try (unsuccessfully) to debunk Professor Benjamin Sovacool’s 2008 meta-analysis of studies comparing carbon footprints of various energy sources (the authors argue a study showing nuclear as relatively high-carbon should be excluded, although excluding such studies, without excluding studies showing nuclear with an essentially undetectable carbon footprint, defeats the purpose of a meta-analysis), if nuclear’s carbon footprint were really our key argument, the campaign would be far less compelling than it is–and far less threatening to nuclear industry interests.

You’d think that people in Finland, of all places, would get this.

Because the most compelling argument against nuclear power as a climate solution (disregarding for the moment issues like nuclear meltdowns, radioactive waste, routine releases of toxic radiation, and nuclear proliferation, and focusing only on climate-related issues), proven over and over and especially in Finland, whose Olkiluoto-3 reactor under construction is the poster child for the failure of the nuclear renaissance, is the industry’s inability to deliver a product that can generate electricity in a reasonable time at a reasonable price.

Construction of Olkiluoto-3 began in 2005, with commercial operation scheduled for 2010, at a fixed cost of 3.2 Billion Euros. A decade later, the reactor is nowhere near complete and may not be finished this decade either. Its cost has just about tripled–right in line with the U.S. experience of the reactor boom-building years of the 1970s and 1980s. The thing is Olkiluoto is not an outlier, as efforts to build new reactors at Flamanville in France, and Vogtle and Summer in the U.S. demonstrate. Each of these projects is well behind schedule (and slipping further) and well over budget.

Meanwhile, costs for solar and wind power have been plummeting. When construction of Olkiluoto-3 began, solar power was not competitive with other generation sources. Now, even the nuclear/fossil fuel industry dominated International Energy Agency (IEA) admits that solar is not only cheaper than nuclear, it’s cheaper than fossil fuels.  Wind power is so cheap they’re literally giving it away in Texas. Energy efficiency remains even cheaper than any generation source.

No new nuclear reactors have come online anywhere in the west since construction of Olkiluto-3 began (Watts Bar-2 is close, but it’s a stretch to call that “new,” since construction on it began in the 1970s). Meanwhile, nearly half of all new generation last year was renewables, again according to the IEA.

Using outdated data, nuclear advocates like to say that renewables account for only a tiny percentage of worldwide electricity generation. While it certainly remains too low, the reality, according to the same IEA report, is that renewables are now the world’s second largest power source, behind fossil fuels. And those who are paid to project growth and make money from accurate projections, like UBS, say the period of rapid growth has barely even started.

So which technology can scale up faster to deal with what is, in fact, a climate crisis?

Nuclear proponents also argue that we should use all low-carbon generation sources, not just renewables. That we should include nuclear “in the mix.”

The problem there is that nuclear has priced itself out of the conversation. With new reactor construction cost estimates pushing $20 billion each (North Anna-3, Hinkley Point) at a time when equivalent amounts of renewables would cost a fraction of that, it makes no sense whatsoever to build nuclear. It would simply take money away from the cheaper, faster sources, which happen to be renewables. If we’re facing a crisis–and we are–why divert resources away from the most effective means of addressing it to the least effective? The end result is that you get less low-carbon power, not more. That’s why nuclear power is counterproductive at addressing climate change: because we get less carbon reduction per dollar spent.

Now add back in all those other arguments that we temporarily dropped before–the ones about nuclear accidents, already nearly one major accident per decade, a number that would soar with 1,000 new reactors; and radioactive waste, which still has (and may never have) no scientifically-defensible solution; releases of toxic radiation even in routine operation that are killing people, the environmental devastation from uranium mining, and the rest. And, seriously, there are people out there who still argue that nuclear power is an answer to an environmental problem?

That there are those people is, of course, why we have to mount the Don’t Nuke the Climate Campaign in the first place. That we’ve touched a nerve means we know we’re beginning to win. That we can expect more pushback simply demonstrates that the time is right. A nuclear-free, carbon-free energy future is within our grasp. We’re hoping for real movement at COP 21 in Paris these next couple of weeks; and even if not there, inevitably across the world as the decade enters its second half and the reality that this really is the answer takes hold.

You can support the Don’t Nuke the Climate Campaign here. For more on the campaign, visit WISE’s international website here, and NIRS’ U.S. website here.

Correction, December 4, 2015: The irreplaceable Greenpeace campaigner Jan Haverkamp has brought to my attention that my statement “No new nuclear reactors have come online anywhere in the west since construction of Olkiluto-3 began…” is incorrect. Romania’s Cernavoda 2 reactor came online in 2011. So, to be factually correct, count that in. But, and I know Haverkamp agrees, that hardly changes the point that counting on new nuclear to scale up in time to have any meaningful effect on carbon emissions is akin to counting on the coal lobby to voluntarily leave its filthy material in the ground: not gonna happen.

6 responses to “When a campaign strikes a nerve”