A few days ago, we published a piece showing the cost of federal nuclear bailout proposals. It’s a big, big number — $50 billion. But all of that money would not create a single new job, nor reduce greenhouse gas emissions by a single pound. In fact, as a new report released last month found, investing that $50 billion in wind, solar, and efficiency instead would accelerate our transition to a zero-emissions electricity system. And, as we showed last week, a national nuclear bailout would prevent the creation of 60,000 new jobs in renewable energy, efficiency, and other clean energy infrastructure.

So with all of these strikes against it, why are members of Congress pushing so hard to give a slate of old, uneconomical nuclear power plants so much money out of a large, but still limited, budget for energy investments needed for a just transition to a carbon-free future? 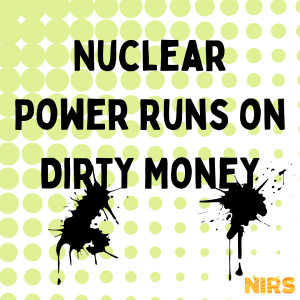 There’s one tried-and-true way to answer that question: follow the money. We wondered: who would actually receive the money proposed to bail out nuclear reactors? The answer is revealing.

From our analysis, we found that there are 33 reactors at 19 nuclear power plants, located in eight states, which would qualify for the proposed bailouts. Those power plants are owned and operated by only eight large power companies (along with four smaller companies that are minority co-owners of three of the plants). Note: because both proposed bailouts would subsidize the same group of reactors, we combined the amounts for our calculations. As a result, nearly the entire $50 billion–94% of the total–would go to these eight corporations.

However, because ownership of nuclear reactors is highly concentrated, over $35 billion of the bailout (70%) would go to just three of those corporations:

All three of these companies have been lobbying for subsidies for their nuclear reactors for years. As we speak, Exelon is pushing for a nuclear subsidy in Illinois and threatening to close four reactors within the next few months if the state legislature does not convene a special session and enact a new law with at least $700 million in nuclear subsidies within weeks.

In fact, both Exelon and Energy Harbor (a spinoff of FirstEnergy), are the subjects of federal corruption cases over billion-dollar nuclear bailouts for which they lobbied in Illinois and Ohio, respectively. In both cases, prosecutors have indicted former company lobbyists and staff to the Speakers of the House of Representatives in each state. Also in both cases, Exelon and FirstEnergy have signed deferred prosecution agreements with federal prosecutors to pay fines and restitution and to cooperate with the prosecutions. As the investigations proceed, more corporate executives, legislators, and lobbyists could be indicted.

In the case of FirstEnergy and Energy Harbor, there are also multiple state-level investigations of these nuclear bailout scandals. At the heart of that case, FirstEnergy made $61 million in bribes and payments to former House Speaker Larry Householder’s political action committee. Through the scheme, FirstEnergy helped win Householder the speakership after the 2018 election, by also buying the support of Republican legislators and Ohio Gov. Mike DeWine. As a result, FirstEnergy was able to get Ohio to enact a $1 billion nuclear bailout, which was key in winning the support of the corporation’s creditors in a major bankruptcy proceeding. The bankruptcy settlement resulted in FirstEnergy spinning off its power plants into Energy Harbor, a new, unaffiliated corporation that only owns the unprofitable nuclear and coal power plants. As a result of the federal corruption case, Ohio legislators repealed the nuclear bailout earlier this year, leaving Energy Harbor without the subsidies its creditors were assured it would have when they agreed to the bankruptcy settlement.

In addition to the federal corruption case, states where FirstEnergy operates want to know where the $61 million in bribes came from. In April, under pressure in the federal case, FirstEnergy filed a report with the Federal Energy Regulatory Commission indicating that “all 14 of its power-providing companies” in five states misappropriated ratepayer monies for a decade. State utility commissions in three of those states–Maryland, New Jersey, and Ohio–are investigating how much money the corporation misappropriated from state residents’ power bills to fund the nuclear bailout corruption scheme.

The corruption investigation in Illinois stems from two bills that have cost electricity consumers billions of dollars: a 2011 “smart grid” law, and a 2016 energy law. The latter awarded Exelon a 10-year, $2.35 billion subsidy for three uneconomical reactors that Exelon threatened to close without the bailout. Consumers have already paid out $1 billion over the last four years. Exelon awarded jobs to associates and relatives of former House Speaker Michael Madigan and other legislators, in exchange for lucrative legislative outcomes. Despite the ongoing investigation, Exelon is now pursuing subsidies in Illinois for its other eight reactors in Illinois, which it claims are also under economic pressure.

In the same year as the Illinois bailout, Exelon won a massive 12-year, $7.6 billion subsidy for four reactors in New York, and won final approval of a deal that has made it the largest utility company in the country. In those cases, there were eyebrow-raising reports of backroom lobbying, employment favors, and political contributions. And in 2018, Exelon and PSEG (the other big winner from a federal bailout) got New Jersey to enact a $300 million/year subsidy for three reactors in that state. Exelon pulls in about $85 million/year through its ownership stake in two of the New Jersey reactors. 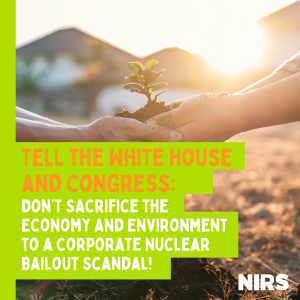 In total, Exelon is receiving nearly $11 billion in nuclear subsidies at the state level. $24.5 billion in federal subsidies may assist Exelon in winning investors’ support for its plan to spin off its nuclear business, as FirstEnergy did. But how is any of this going to help the country solve the climate crisis?

With $30 billion of a federal nuclear subsidy accruing to two companies that are the subject of federal corruption cases over state-level nuclear subsidy laws, this could become an even larger scandal. President Biden and Congressional leaders should not risk the American Jobs and Families Plan being derailed over corporate corruption cases. And as we’ve shown, the infrastructure bills will do more for climate, jobs, and justice without a nuclear bailout, and by simply investing in the transition to 100% renewable energy.

There are many reasons why we cannot afford to sacrifice the climate to a nuclear bailout. Our economic future, justice for all communities impacted by climate chaos and the nuclear fuel chain, and our environment all depend on real action and true investment in clean energy, good jobs, and a just transition. Short-sighted corporate interests–once again–block the path towards the liveable, just, and equitable future. We cannot allow the pockets of nuclear corporations and their shareholders to grow as our window for climate action shrinks.

We can’t let our leaders sacrifice the economy and environment to a corporate nuclear bailout scandal! Tell President Biden, Vice-President Harris, and your representatives in Congress: “No Corrupt Nuclear Bailouts in the American Jobs and Families Plan – Invest in American Jobs and a Just Transition to 100% Renewable Energy by 2035”