How Nuclear Bailouts Would Cost over 60,000 Green American Jobs · NIRS

Specifically:  how many jobs would a nuclear bailout actually create?

Over the last few weeks, we’ve shown why subsidizing nuclear power is a bad investment for climate, environmental justice, and renewable energy. Earlier this month, we co-released a major report with Friends of the Earth that shows why nuclear bailouts fail on all counts: climate, jobs, and justice.

To be sure, this country has needed a major jobs program for at least a generation. As proponents of the Green New Deal note, because the climate crisis requires the transformation of our entire energy economy, we will need to create millions of jobs to take it on. President Biden’s American Jobs and Families Plan–and the $4.1 trillion in legislation members of Congress are advancing–are also supposed to create millions of jobs.

So this week, it’s time to dig into jobs and climate–and how subsidizing nuclear reactors hurts both.

Billions for a Nuclear Bailout = No New Jobs (at most) 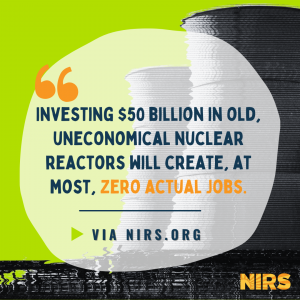 That’s right. Investing tens of billions in old, uneconomical nuclear reactors will create, at most, zero actual jobs. The subsidies would go to power plants that are currently operating, ostensibly to prevent any more of them from closing because they are not making enough profits. The reality is, that the reactors that would be bailed out were built 30-50 years ago and are currently operating with full-time staff. So the best the subsidy could do is to avoid potential layoffs of nuclear workers, not create any new jobs for people who are currently unemployed or underemployed.

In reality, the subsidy could actually result in a loss of jobs. That is because the subsidies would not require the companies to keep workers employed at current levels. We know that nuclear power companies have cut jobs at reactors that are already receiving subsidies. Earlier this year, Exelon revealed that it cut its nuclear workforce in Illinois by 15% since 2016, despite receiving nearly $1 billion in subsidies over the last four years. Three of its eleven reactors in Illinois (Clinton and Quad Cities 1&2) have been receiving $235 million/year in ratepayer subsidies under a 2016 law. Yet Exelon cut its nuclear workforce statewide by about 720 jobs, averaging 65 per reactor, including at Clinton and Quad Cities. Given the financial conditions of the nuclear industry, it’s possible that thousands of nuclear workers could still lose their jobs even if Congress passes $50 billion in nuclear subsidies.

Opportunity Costs: Subsidizing nuclear power could prevent over 60,000 jobs from being created

Budgets are about choices. Senate Democrats have agreed to $3.5 trillion to fund a package of physical and social infrastructure, with funds raised by increasing the minimum income tax rates on corporations and very wealthy people (household incomes more than $400,000/year).

So the budget is set. The proposed nuclear subsidy would come out of that budget–diverting funds from other programs, priorities, and investments. By our calculations, knowing that President Biden’s American Jobs Plan proposed  $469 billion for renewable energy and other electricity infrastructure, the nuclear subsidy would take up more than 10% of that budget. This would be a massive amount of money to waste on a program that would not create a single job and, at best, would sustain a few thousand jobs at nearly four times the cost of the rest of the energy budget.

If those bilions were spent on other energy programs–renewable energy, energy efficiency, battery storage, and/or grid modernization–it would create over 67,000 new jobs. That would be enough to re-employ all of the nuclear workers in other energy industries and create jobs to employ 60,000 more people who are currently unemployed or underemployed.

So here is the choice: are we going to give tens of billions to bail out old reactors and ensure most of those workers keep their jobs for a few more years? Or are we going to create four times as many jobs building the energy industry of the future? And if we go with the bailouts, what about the 60,000 Americans for whom the American Jobs Plan will fail to provide jobs?

Decommissioning: A plus for jobs and climate

In effect, decommissioning could reduce the number of job losses when reactors close by 50%, at virtually no cost to taxpayers. That means a national nuclear subsidy would sustain, at most, 8,700 jobs, relative to the alternatives. Along with allocating significant funds to renewable energy, efficiency and other emissions-reducing investments, the infrastructure bill could create 60,000 more jobs than the proposed nuclear subsidy would enable.

And what’s more, those workers would build three to four times as much fossil-free renewable energy and energy efficiency upgrades than subsidized nuclear power plants generate. We have a very clear choice:

1 – Give the nuclear industry billions to maintain the status quo for the next decade, even if they lay off workers anyway. We sustain at most 17,000 nuclear jobs in about 20 communities, but we lose the opportunity to create 67,000 new jobs all around the country.

2 – We can spend that money accelerating the transition to a zero-emissions, 100% renewable energy economy–keeping all nuclear workers employed and putting 60,000 more people to work.

Option #1 is an expensive way to prop up the unjust and inequitable energy status quo: high cost, economic inequity, and fewer family-sustaining jobs. Option #2 not only helps build a thriving, clean, zero-emissions economy, with tens of thousands more family-sustaining jobs. It helps workers and communities make the transition from the dirty energy economy, as well.

As President Biden himself has famously said, “Don’t tell me what you value. Show me your budget and I’ll tell you what you value.” If nuclear bailouts end up in the American Jobs and Families Plan, it will not be because Washington leaders value jobs and families. It will be because they value the demands of powerful nuclear corporations, and are willing to compromise jobs, families, climate, and justice. 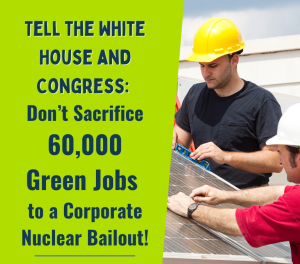 EXTRA: The Numbers Behind the Story

Keeping people employed is important, but giving nuclear power companies $50 billion is a massively wasteful way of doing it. Here’s why: the average nuclear worker makes $100,000/year in salary and benefits. The average nuclear reactor employs about 420 full-time staff, plus about 1,000 contractors for an average of 2-3 weeks every 18-24 months. So, each reactor has, on average, roughly 450 full-time equivalent jobs.

The $50 billion in subsidies proposed by Sen. Cardin (D-MD) and others would go to about 39 reactors–thereby supporting around 17,500 jobs, with a payroll of about $18 billion over the 10-year period of the subsidy. Effectively, taxpayers would be paying the entire payroll cost of these businesses, plus an extra $32 billion, but still would not be investing in the creation of a single new job.

(NOTE — Government business incentives are never based on covering the entire payroll cost of a business for a decade, much less covering payroll plus a large share of other expenses. So the magnitude of the proposed nuclear subsidies is truly extraordinary)

The true cost could be even more wasteful because there is no reason to believe that all 39 subsidized reactors would shut down in the next decade if they did not receive subsidies. There are currently plans for only ten reactors to be retired before 2030. One of those is closing in 2022 (the Palisades reactor in Michigan), with or without subsidies. Two others are closing in 2024 and 2025 (Diablo Canyon 1 and 2 in California), but they would not be eligible for the proposed subsidies. Diablo is owned and operated by a state-regulated utility company (PG&E), but the bailout legislation applies only to “merchant” reactors that earn money by selling electricity on the competitive market.

There are four reactors in Illinois (Dresden 2&3 and Byron 1&2) that are currently slated to close this fall, but might not if they received a huge subsidy. Three reactors are currently scheduled to retire in 2029 when they turn 60 and their federal operating licenses expire (Nine Mile Point 1 and Ginna in New York, and Dresden 2). A subsidy that expires in 2030 or 2031 will not be enough of an incentive to justify extending their licenses for another 20 years.

So, at present, $5 billion/year would prevent layoffs at as few as four reactors, employing only 2,600 workers with an annual payroll cost of $260 million–adding up to about $2.6 billion over ten years. The other $47.4 billion in nuclear subsidies could not be credited toward creating or preserving a single job. In that case, the per-job cost of the subsidy would be absurdly high: $4 million.

Maximizing job retention through decommissioning would require the Nuclear Regulatory Commission to establish more effective regulations, rather than the increasingly hands-off approach the agency has adopted. Since 90% of NRC’s budget is funded by fees levied on the industry, the cost of beefing up decommissioning regulations would be nominal. States and local communities would also support stronger regulations, to establish greater transparency, planning, accountability, and public involvement throughout the decommissioning process.