President Biden’s American Jobs Plan, which is being negotiated in Congress this summer, is a historic opportunity to build a thriving, just, and equitable clean energy economy, finally putting the U.S. on the path to fight climate change with the ambition, scale, and commitment to justice that we need. The American Jobs Plan promises to transform our energy system to 100% clean energy by 2035 and create millions of jobs to do it. However, in May 2021 the White House announced that it wants to include a massive subsidy for nuclear power in the American Jobs Plan. Soon after, some Senators introduced a proposal to create up to $50-$100 billion in subsidies for aging reactors over the next 10 years. Worse, these proposals for nuclear subsidies would steal the budget for solar, wind, and other renewable energy, stalling the only real solutions to the climate crisis.

Subsidizing nuclear power plants – and the entire dirty fuel chain and waste stream involved in nuclear power – is an unjust and unjustifiable waste of money and resources in the critical work of climate action. The twin environmental crises of climate change and radioactive waste demand that we phase out both nuclear power and fossil fuels as soon as possible. We can’t do that if we take money away from renewables to bail out dirty, old, dangerous nuclear power plants. And just as importantly: we certainly can’t keep perpetuating environmental racism and injustice by making radioactive waste and risking nuclear disasters that are endangering human health, especially in Indigenous, Black, and Latino communities. Nuclear power has no place in a just and equitable energy future, as the burdens of nuclear power consistently oppress marginalized communities along race, class, and gender lines. 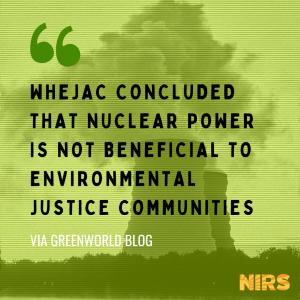 Federal investments and subsidies in nuclear reactors directly undermine the purpose of the American Jobs Plan and the commitments leaders in the Biden Administration have made to environmental justice. Through President Biden’s Executive Order 14008, titled Tackling the Climate Crisis at Home and Abroad, the White House Environmental Justice Advisory Council (WHEJAC) was established to advise the Federal Government’s efforts to address environmental injustice. In a report issued in May, WHEJAC recommended ruling out nuclear power under the council’s criteria for federal investments that maximize benefits and avoid harm in environmental justice communities. Rather, WHEJAC concluded that nuclear power is not beneficial to environmental justice communities, who are on the frontlines of radioactive exposure, contamination, and environmental degradation across the entire nuclear fuel chain and radioactive waste streams.

In order to follow through with its commitments to climate action and environmental justice, the Biden Administration must heed the advice of its own Environmental Justice Advisory Council and refuse to bailout nuclear. Instead of propping up aging reactors and perpetuating the injustices of nuclear power, the Biden Administration must implement policies that end the environmental injustices of the nuclear era. Congress and the Biden Administration should commit to phasing out nuclear power, cleaning up radioactive sites, making reparations to impacted communities, and begin a truly just transition to 100% renewable energy – now. Our climate and justice imperatives cannot afford to wait for another round of nuclear licensing, waste production, and risk of disaster that a national nuclear bailout would enable.

A dirty chain of injustice

The American Jobs Plan and the Biden Administration promise to trailblaze the clean energy future for the U.S. To call nuclear power “clean” is an affront to justice, science, human rights, and common sense. The highly dangerous, long-lasting radioactive pollutants from nuclear power impact marginalized and disenfranchised communities disproportionately, threatening the health and environments of the most vulnerable. When we talk about the environmental injustices of nuclear power, we must look at the entire fuel chain of radioactive materials. The nuclear fuel chain is a dirty, dangerous, expensive, and unjust process that has no place in a clean, just energy future: from uranium mining, milling, and enrichment to produce nuclear fuel; to the routine radioactive releases and risks of operating reactors; and finally, to the transportation and perpetual burden of high-level and so-called “low-level” radioactive waste created by nuclear energy. Tracing the nuclear fuel chain from cradle to grave reveals countless environmental injustices, tragic accidents that continue to hurt communities, and radioactive harms for which no reparations have been made.

The injustices of the nuclear fuel chain and nuclear power (not to mention the consequences of the Biden Administration failing to act effectively on climate) are immense and far-reaching. Bailing out nuclear power would only worsen the threats to human health, environmental safety, and future generations posed by the perpetually dangerous wastes and risks of the nuclear power industry.

The western U.S. has served as the sacrifice zones where radioactive fuels are mined, milled, and processed and where the bulk of the nation’s nuclear waste is currently targeted for long-term storage. The impacts of these nuclear activities fall disproportionately on Indigenous communities, including the Shoshone, the Navajo Nation, the Hopi, Pueblo, Apache, Havasupai, Ute, and others in the Four Corners region. Survivors of nuclear disasters like the Church Rock uranium mill tailings spill in New Mexico continue to fight for recognition and reparations. 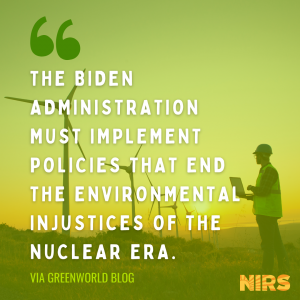 And these stories of environmental injustice are only the tip of the iceberg. Another important intersection is found in the numerous studies that find impacts of radiation exposure are felt more acutely by women and girls, who are not adequately protected by the radiation standards set by the NRC and EPA. Last week, in commemoration of Juneteenth with our allies at Georgia-WAND, we highlighted Shell Bluff, Georgia, a predominantly Black community that is both downwind and downstream from Savannah River Site in South Carolina, and the location of Vogtle nuclear power reactors. Shell Bluff is just one of the myriad communities across the United States that stands in harm’s way of nuclear power and contamination.

Bailing out nuclear reactors and re-investing in the entire chain of radioactive activities involved is a betrayal of Shell Bluff and the many other Black, Indigenous, People of Color, and low-wealth communities that live adjacent to uranium mines, nuclear waste dumps, toxic incinerators, atomic reactors and other such facilities. These communities need reparations and a clean energy future, not a revitalized system of nuclear colonialism that continues the status quo of harm and injustice. The American Jobs Plan is a chance to win the nuclear-free, carbon-free future we need and deserve, but it will fail to deliver on its promise if Congress and the Biden Administration include the unwise and unjust proposed bailout of the nation’s nuclear power plants.

The proposed bailout of the U.S. nuclear industry has no place in the thriving, just, and equitable clean energy economy the American Jobs Plan would otherwise create. Our chance to create a just, carbon-free, nuclear-free energy future depends on you. Take action and tell the Biden Administration and Congress: “No Nuclear Bailouts in The American Jobs Plan – We Need 100% Renewable Energy by 2035!”