Time to get off the fence on nuclear · NIRS 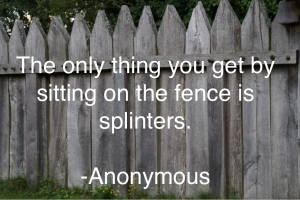 Last week, we published a blog about a new study by researchers at the University of Sussex that shows nuclear power is no solution to the climate crisis, and that it is actually keeping countries from making the steep reductions in greenhouse gas (GHG) emissions we need to keep the world livable.

This study has major implications for climate and energy policy in the US and around the world. In June 2020, the US Climate Action Network made a big splash by publishing the Vision for Equitable Climate Action. VECA is not only the most comprehensive and detailed policy agenda put out by the climate movement, it is rooted in principles of racial and economic equity and justice, developed by over 170 people from over 100 organizations.

It is also the first major climate movement agenda to explicitly call for a phaseout of nuclear power. Along with other recent climate justice agendas, from the Equitable and Just National Climate Platform and the People’s Orientation to a Regenerative Economy to the THRIVE Agenda and the Feminist Green New Deal, VECA is part of a broad shift toward transformative solutions to the climate crisis, calling for a rapid, just and equitable transition to 100% renewable energy.

Still, moderate climate organizations and political leaders have reacted with hesitation and resistance, skeptical that transformative change is too risky, or not supported by the science. And nuclear power has been one of the central sticking points, with some insisting that it plays too big a role in our energy supply.

The University of Sussex study proves those assumptions to be wrong. The study covered 123 countries over a 25-year period. It confirms that renewable energy is many times more effective than nuclear in reducing GHG emissions, across the board. Even more than that, in all but a few countries where it has led to small emissions reductions, investing in nuclear power has either not had any impact at all, or actually resulted in increased emissions. The study also shows that investments in nuclear and renewables tend to crowd each other out. In other words, every dollar we waste on nuclear energy is a dollar not invested in truly clean, renewable energy.

Despite this evidence, supporters of nuclear and their moderate allies would have us spend billions of dollars on bailouts for a technology that not only is increasingly uncompetitive against renewables, but also leaves a trail of destruction in its wake, particularly in minority and low-income communities. What we need is an approach that will cut emissions while doing justice to those communities. Bailing out nuclear is not that approach. VECA is, and other major climate policies should follow its lead – including and especially the Green New Deal.

While opponents of the Green New Deal complain about its potential $2 trillion cost, what is that compared to the benefit of not only literally saving the world, but of building a sustainable new economy with healthy communities, good, union jobs and a real economic security? The $2.5 trillion COVID-19 relief bill Congress passed in April shows that, when the country knows we are facing a true crisis, we can find the political will and the money to address it.

But like with COVID, we don’t have time to waste on things that aren’t going to work, and we shouldn’t waste money on them either. When it comes to the Green New Deal, we have to be bold, visionary, and ambitious, and we have to put equity and justice first. That alone is reason enough to make sure the Green New Deal prioritizes a phaseout of nuclear power, with a just transition for workers and communities. But now the science is in, and it shows nuclear is out. And the Vision for Equitable Climate Action and the climate justice movement have it right.