Why October 21 will become known as International Embarrassment Day · NIRS 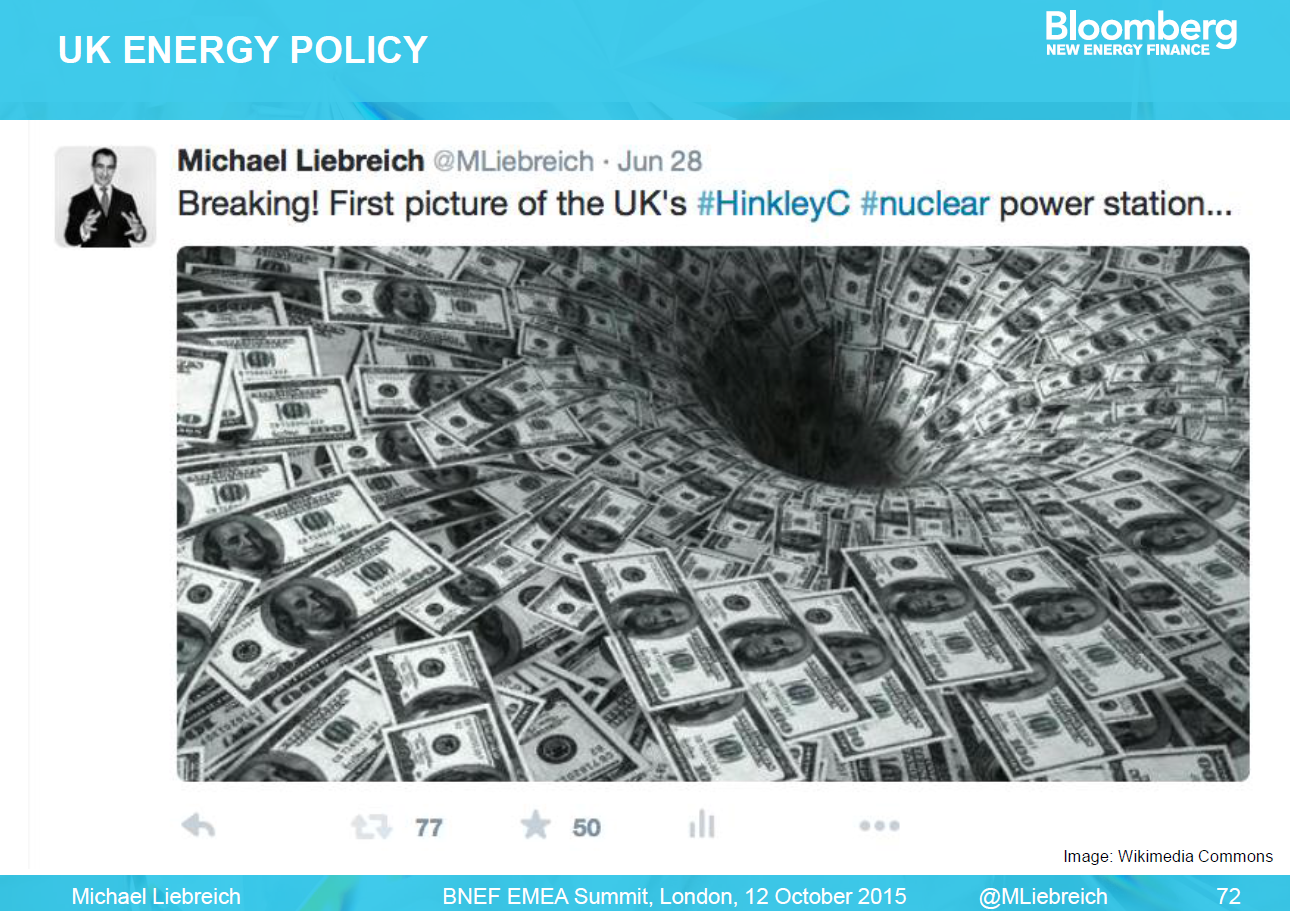 Imagine it’s October 2017. A young conservative, let’s say Marco Rubio (because the idea of the other young conservative in the race, Ted Cruz, is just too odious), has been elected President. He and his new energy secretary and new treasurer decide what the U.S. needs more than anything is some shiny new nuclear power reactors. Big ones.

But no one in the U.S. wants to build them. They’re just too expensive. The ones we have under construction at Vogtle and Summer are over-budget and behind schedule, same with the ones being built in Europe. And renewables are coming on strong, even stronger and cheaper than they were back in 2015, especially since Congress extended the production tax credits for wind and solar before Obama left office.

So President Rubio (who is, in fact, a strong supporter of nuclear power, as are the rest of the candidates in the GOP primaries) and his team decide on a multi-pronged strategy to get these things built. First, since no one in the U.S. wants to build them, they’ll reach out to foreign companies, like Electricite de France (EDF) to get it done. While EDF starts arranging the financing, the Rubio administration slashes all those renewable subsidies down to essentially nothing. After all, they tell Americans, renewables are now mature technologies that don’t need or deserve government support. Government support distorts the marketplace, everyone knows that. Meanwhile, Rubio promises a multi-billion dollar loan guarantee for the new reactors.

When, inevitably, EDF comes back and says they’d love to build these reactors, but those other utilities have a point–they’re pretty risky financially–Rubio’s administration steps in again and says don’t worry, since you’re willing to build these reactors when no one else will, we’ll guarantee that you’ll get twice the going rate for the electricity generated by them.

Great, says EDF, we’ll do it! Except, we don’t have enough money to put up for construction, even with your loan guarantee we need a partner. You need to help us find one.

So Rubio, et al, put on their thinking caps and quickly realize only another government is a large enough entity to become a partner, no one else has enough money either. And the only country with a lot of cash right now, and that might be interested, is China. So they encourage EDF to make a deal with China, and they help EDF finalize the deal, which ends up not only making China a partner in this project, but gives China the right to build a bunch more shiny new reactors–but this time using Chinese instead of French technology–in other parts of the country.

Meanwhile, opposition is building to the deal with every new step. First were, of course, the clean energy and environmental advocates. Then came what’s left of the renewable energy industry, which started closing down when all the subsidies were withdrawn. Then came most of the nation’s economists and global financial analysts, who said the idea just makes no economic sense at all. Much of Congress started speaking out against the deal. Polls showed only one-third of the public approved of it. Then the nation’s national security infrastructure, from Army Generals on down, opposed it, saying we were turning too much of our energy security over to the Chinese. They also warned that the Chinese could put in hidden “logic bombs” into the computer codes that run the reactors, especially the Chinese-designed ones, that would give China the power to shut them down when it wanted; during, for example, an escalation of hostilities.

Then came even the pro-nuclear “environmentalists,” who realized the project would be a complete debacle and itself set back the cause of nuclear power for decades, if not forever. And by the time Rubio invited the Chinese Premier to sign the papers–not to mention a State Dinner in his honor–even Rubio’s own former top strategy advisor publicly said the “sucking up” to China was a “national humiliation.”

And at least the U.S. has a law prohibiting foreign ownership of U.S. nuclear reactors (a law the NRC is trying to weaken by the way), so this scenario couldn’t play out anyway.

But it is, in fact, already playing out. Not in the U.S. of course. But in the United Kingdom, where yesterday those papers were signed against all that opposition in what will someday go down as perhaps the greatest folly of the 21st century. Mark that date: October 21, 2015. Someday it will become known as International Embarrassment Day, when everyone will take the day off and imagine all the possible ways a country could possibly work harder against its own interests, and then vow to make sure those would never happen.

On this side of the Atlantic, we’ve tried to make sense of what’s happening in energy and climate policy in the U.K. In August, UK activist Pete Roche tried to explain in these pages.

Yesterday, the government of the UK signed a deal with China that makes Chinese nuclear firms one-third partners, with EDF holding the other 2/3, in the project to build two new EPR reactors at Hinkley Point, at a cost estimated to be at least $25 Billion, and probably much more. Completion date is said to be 2025. In financial terms, it is the single largest project ever undertaken in the U.K. And yes, as an incentive, EDF gets to sell that electricity at about twice the going rate. And yes, the government has promised a multi-billion dollar loan guarantee too.

The deal also gives China the right to build some new reactors in the U.K., of Chinese design. Meanwhile, nearly every day brings news of some British renewable energy firm cutting back or closing entirely because of the slashing of government support for renewables. Perhaps those technologies were not quite as mature as the government claimed, especially since many of the companies in the renewable energy industry in the U.K. are, just as is the case in the U.S., small business. But it may not be pure hatred of renewables that is behind the government’s slashing of support; it may just be that with all the propping up of the nuclear deal, the government couldn’t afford to keep up renewable support as well. So much for fear of distorting the marketplace.

And the idea that the government has turned over its energy security–and in essence its national security–to the Chinese in return for a few bags of gold is beginning to take hold in Britain. Though, at this point at least, not so strongly to spark a no confidence vote that could bring down the government. As the Hinkley project begins its descent into abject failure–as it inevitably will (ironically yesterday EDF announced a further 3-year delay for the EPR it is building at Flamanville, France, making it a 13-year project, while Areva’s Finnish EPR is already a ten-year project with no end in sight), such a no confidence vote seems more likely (that’s one big difference in our political systems, no such thing exists in the U.S.).

No, from this side of the Atlantic, there is no way to understand the U.K.’s current energy policy, which is aggressively at odds with most of the rest of the world, and certainly with all of the West. And it’s not likely that even a President Rubio, or Cruz, or anyone else running from either major party, could even come up with such an inane, counterproductive scenario, much less implement one. We hope. It’s not quite Thanksgiving yet, but perhaps that is one thing Americans can be thankful for this year.

As for our friends in the UK, our sympathies. In the end, we believe those projects are going to fail massively, and the odds that these reactors will actually be built and operating are vanishingly small. So there is that. And, as British activists point out, the deal isn’t quite done, and there is still some chance to scuttle it before it starts.  But it appears likely that an awful lot of money–and national pride and prestige–is going to be wasted in the interim, and an awful lot of renewable energy that could be deployed won’t be. All because some government officials have fallen for the idea of shiny new nuclear reactors–no matter what the cost.