Too cheap to meter? Not nuclear--solar! · NIRS 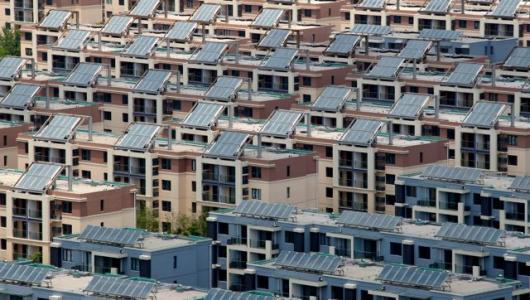 The nuclear power industry certainly rues the day the concept that atomic electricity would be “too cheap to meter” entered the public’s mind. The phrase has become inextricably linked with nuclear power, but not in the way its creators envisioned: instead of as a success story, it has become a symbol of nuclear power’s economic failure.

“Too cheap to meter” too quickly became “too expensive to use” and “too costly to build.”

So the headline above is offered with some trepidation and a grain of salt; over-promising on solar power will prove no more beneficial than it was for nuclear.

Still, the comparison is obvious. As giant nuclear utilities seek new ways to game the system and bleed ratepayers for every penny they can–whether or not those ratepayers have any anything left to bleed–to prop up reactors that produce electricity normal people simply can’t afford and shouldn’t have to pay for, the cost of solar power just keeps falling and falling.

Today’s case in point: the city of Austin, Texas recently put out bids for 600 Megawatts of new solar power. They received bids for nearly 8,000 MW–a clear indication that we have barely begun to touch the capability of solar to power our nation. Of those bids, nearly 1300 MW, or double what Austin intends to buy, came in under 4 cents per kilowatt/hour.

The problem for the solar industry is that it’s prices are dropping so fast that it’s making large purchasers like Austin question whether they should lock in, even at these rates. Last year, Austin signed contracts for 150 MW of solar at 5 cents per kilowatt/hour, which sounded great at the time. Now they can get solar 20% cheaper. What if they buy just what they need for now, and buy more in a few years, when presumably it will be even cheaper? That’s probably what Austin will do.

But if everyone sits around waiting for solar to actually become almost too cheap to meter, it never will, and it won’t grow at the rate necessary to become a dominant source of electricity in the U.S. either, not to mention being the climate solution we need.

Fortunately, not everyone is waiting; in fact, as we’ve reported here frequently, solar is growing rapidly. And it appears it is growing even more rapidly than the government, at least, has acknowledged. In fact, government estimates of solar generation are off by nearly 50%, according to GreenTech Media, because it has woefully underestimated the amount of rooftop solar in place. Greentech points out that actual solar generation figures indicate “…that solar power in the U.S. now supplies enough electricity to meet the yearly demand of Hawaii, Rhode Island, Alaska and Vermont combined.”

Austin is already a leader in clean energy; our suggestion is that Exelon, Entergy and the rest of the nuclear giants, instead of trying to bilk ratepayers to keep failing and dangerous reactors open, try bidding out to replace their electricity supply with solar–you’ll find it’s cheaper than you think, both for the utility and your ratepayers, especially those working at minimum wage, or working two or three jobs to get by, or living on Social Security or disability.

Oh, but there’s that baseload power issue. Exelon and Entergy and the rest claim we need baseload power that only nuclear and coal can provide. As Amory Lovins discussed last night on a NIRS telebriefing, that is simply not the case–but not because of the plunging costs of storage, but because intelligent and modern grid operations make it irrelevant. You can listen to the full telebriefing I moderated last night of Amory’s talk, plus that of NIRS’ executive director Tim Judson, here. It’s an mp3 file. The telebriefing focused on the energy lessons for the U.S. from Germany and Japan.

The energy that’s even cheaper and cleaner than solar power is the energy that’s never used in the first place. Energy efficiency is keeping down electrical demand in the U.S. to the point where, despite a growing economy and population, we may never return to our peak days of 2006-2007.

A new report from the American Council for an Energy Efficient Economy (ACEEE) says that the efficiency measures already in place saved the U.S. $800 Billion last year.

Yet the U.S. remains far less energy efficient than the European Union or Japan. ACEEE believes we could reduce our energy use another 40-60% by 2050 relative to current energy forecasts.

Finally, in some parts of the country, installing solar power–especially rooftop solar that you own and your utility thus doesn’t–isn’t as easy as it should be. In some places, it’s basically forbidden. So from North Carolina comes this heartwarming story about a small Greensboro church defying Duke Power, which argues that electricity must be either self-generated or from a utility–no third party ownership. In this case, as a means of challenging the utility, NC WARN is the third party owner of the solar panels–the church will pay NC WARN a modest fee to cover installation and maintenance costs. The issue will end up in court, but either way, the church will win.

According to InsideClimate, “Still, NC WARN’s [Jim] Warren is optimistic. “We think we are going to win,” he said. But even if commissioners rule against them in the test case, he told InsideClimate that his group will “make sure the church has solar anyway.” The contract between the two groups stipulates that if this regulatory challenge fails, NC WARN will donate the panels to the church.”

0 responses to “Too cheap to meter? Not nuclear–solar!”