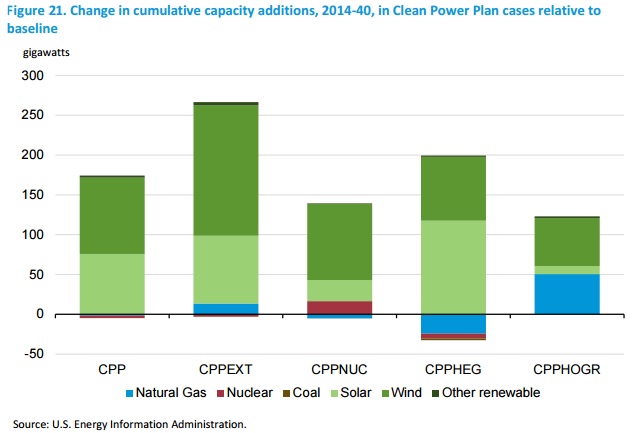 The Environmental Protection Agency has not yet released the final version of its Clean Power Plan (CPP), but reportedly has sent it to the White House for final review and the public release is expected in August.

But the Department of Energy’s Energy Information Administration (EIA), which typically has vastly underestimated and under-projected the growth of renewables over the years, recently released projections of how much carbon emission reductions the EPA’s Clean Power Plan would produce, based on several different scenarios.

Under that scenario, nuclear power would grow by about 20 Gigawatts, or about 18-20 large reactors, by 2040 (assuming the plan is extended from its current date of 2030). Under the baseline scenario of the draft CPP released last year, nuclear is actually expected to decrease by a few Gigawatts. Yet there is almost no difference in the level of carbon reductions in the two different scenarios; in fact, EIA predicts both scenarios result in the same 30% decrease in emissions by 2040.

One critical reason is, as Utility Dive explains, under the high nuclear scenario (CPPNUC in the graph at the top of the page), “EIA predicts that counting nuclear for CPP compliance (CPPNUC) or increasing domestic oil and gas production (CPPHOGR) would significantly hamper solar growth.” Given that EIA has consistently underestimated solar power over the years, solar growth without nuclear could expected to be even higher than EIA projects, and thus so would the reduction in carbon emissions be greater without nuclear.

The choice is obvious. The question of whether EPA will bow to nuclear industry pressure and choose the nuclear path is less so.