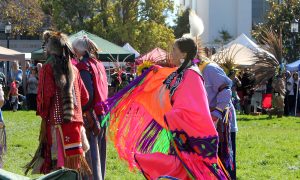 The resistance of Indigenous peoples and their allies has created greater awareness about abuses and injustices that have been perpetrated against Native peoples since European empires colonized their lands. This is one of the reasons why NIRS commemorates this day as Indigenous Peoples’ Day.

As an anti-nuclear organization, we take Indigenous Peoples’ Day as an opportunity to acknowledge and denounce instances of nuclear colonialism committed against Indigenous peoples all over the world.

For over 70 years, the US nuclear power and weapons industry has consistently targeted Indigenous communities for contamination and environmental sacrifice. The radioactive scars of nuclear colonialism affect Indigenous peoples throughout the lands of Turtle Island (also called North America) and the Pacific Islands occupied by the United States of America, including:

How can we start making things right for the Indigenous victims of nuclear colonialism? Here’s a step in the right direction: Acknowledging and compensating the victims of the first nuclear weapons test in the US, called ‘Trinity’, and workers poisoned by mining and processing uranium for nuclear weapons and power. Those communities, disproportionately Indigenous peoples, are still living with the fallout from Trinity and over 200 similar nuclear weapons tests—and decades of uranium mines, mills, and spills. Too many of them have never been recognized or compensated for their decades of pain and suffering.

In 1990, Congress passed a law meant to compensate victims of atomic bomb testing, but it doesn’t go nearly far enough and will expire in 2022. A bill in the House of Representatives—H.R.3783, the Radiation Exposure Compensation Act Amendments of 2019—would expand compensation more fully to more of those affected by the tests and uranium extraction. But Rep. Jerrold Nadler, chair of the House Judiciary Committee, hasn’t even scheduled a hearing for the bill yet.

The communities that live downwind from nuclear test sites (“Downwinders”) really need our support right now. Whether you’ve already written your member of Congress about this or not, they need to hear urgently from you now. Tell your member of Congress to ask Jerrold Nadler and Rep. Jim Jordan (the committee’s Republican ranking member) to schedule a hearing for this bill.

If our elected leaders truly care about the rights and sovereignty of our Indigenous relatives, they must take action to repair the harms of nuclear colonialism.

We grieve for the victims of the Trinity test and all other instances of nuclear colonialism. But we can do more. We can start setting things right. Compensating the Downwinders and uranium workers is an essential step in the right direction.