In Commemoration of Olson’s 28 Years Educating, Organizing, and Mobilizing for a Nuclear-Free, Carbon-Free World 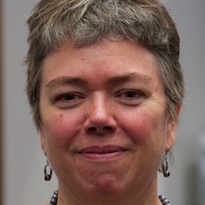 Mary Olson, a leading voice against nuclear power, radioactive waste, and the health impacts of ionizing radiation, is retiring from Nuclear Information and Resource and her long-time position as our Southeast Office Director. Mary has been with NIRS for more than two-thirds of our history—and her career has indelibly shaped our organization and the nationwide movement we serve. She will conclude her duties following a National Grassroots Summit on Radioactive Waste, in November 2019.

For 28 years, Mary has led major projects at NIRS, and left a legacy of significant impact on energy and environmental policy in the United States, and abroad: from lobbying and organizing against the proposed “Mobile Chernobyl” nuclear waste transportation bills in the 1990s, to founding our Southeast regional office in the 2000s; from heading up the NixMox campaign to prevent the use of nuclear weapons plutonium in commercial reactors, to working with local organizations and communities throughout the Southeast to oppose over a dozen proposed new nuclear power reactors; from national summits on nuclear waste, to training and building networks of grassroots activists on radioactive waste; and in recent years, from her groundbreaking work on the impacts of ionizing radiation on women and girls, to influencing development of the first global treaty for the abolition of nuclear weapons.

We celebrate the enormous role Mary has played in NIRS, and are immensely grateful for the commitment and spirit that Mary brought to our organization and the movement. We are grateful for the essential part she has played in directing and fulfilling our mission, while spending the majority of her career here.

We respect and honor Mary’s decision to retire from being on the frontlines of grassroots environmental activism, after nearly three decades on the job. Mary’s retirement from her position at NIRS is inevitably a loss to us—there is no way around that. But it is the opening of a new chapter for her to pursue other endeavors, such as the Gender and Radiation Impact Project. We look forward to following her efforts, and are certain she will continue to make even more contributions toward a safer, sustainable, more just and equitable world.