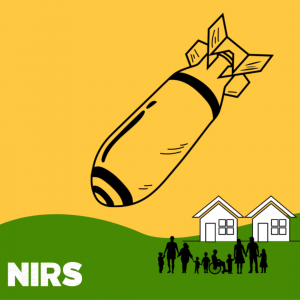 Seventy-six years ago, on July 16, 1945, the first nuclear bomb in the world was exploded in the desert of New Mexico by U.S. military scientists and officials. 40,000 people lived within 50 miles of the blast, many living self-sustained off the landscape. As soon as the bomb went off, the fallout began. Over many decades, radiation exposures traveled through the environment, affecting the land, local water, crops, livestock, and wild animals upon which local residents relied and continue to rely. No one was warned, no one’s health was tracked. Many of these downwinders, victims of the first atomic blast, suffer and have died from cancers and other radiation health effects due to those exposures. They and their families have never been compensated with reparations, not even receiving support with basic health care costs.

Three weeks later, on August 6th and 9th, 1945, the U.S. dropped nuclear bombs on Japanese civilians in Hiroshima and Nagasaki, Japan. After World War II, hundreds more nuclear weapons were exploded for “testing” in Nevada and the Pacific Ocean, spreading nuclear fallout downwind and around the planet, directly and repeatedly exposing those immediately downwind.

Exactly 34 years after the Trinity Bomb, on July 16, 1979, also in New Mexico, one of the world’s worst uranium disasters in history began. The dam holding back massive amounts of uranium tailings at Church Rock on the Navajo Nation broke, releasing uranium downstream through communities for over 80 miles, causing contamination, burns, livestock deaths and untold health effects on residents. 43 years later, residents of Red Water Pond Road, the community closest to the Church Rock site, are still waiting for compensation and reparations. In fact, the US EPA is now trying to relocate community members–with no plan for cleaning up the community and enabling them to rebuild. And on top of that, EPA does not plan to remove contamination to a secure storage site. Instead the plan is to dump contaminated soil from the spill at the Church Rock uranium mine site. These injustices must stop, and the affected communities must be supported in determining the path forward.

“Since 1990 the U.S. Government has been compensating “Downwinders” who lived adjacent to the Nevada Test Site.  The fund set up to extend compensation and medical care is called the Radiation Exposure Compensation Act (RECA).  The Downwinders in New Mexico have never been included or compensated although they were the first people to be exposed to radiation any place in the world. New Mexicans were also downwind of the Nevada test site through the summer of 1962, well documented.”

Downwinders of U.S. nuclear bombings in the Pacific have not been eligible for compensation either, even though they and their islands were exposed and contaminated by multiple U.S. nuclear weapons explosions. And there are many other downwind populations that have not been included in the existing RECA. The current RECA law compensates residents in certain parts of Nevada, Utah, Colorado, and Arizona who were downwinders from the Nevada Test Site.

As of this writing, we understand that Representative Leger Fernandez (D-NM) and Senator Crapo (R-ID) are preparing to introduce updated versions of legislation to extend and expand RECA.  It is expected to expand and extend RECA compensation to downwinders in New Mexico, parts of Idaho, Montana, Colorado, Guam, and the Northern Mariana Islands, additional parts of Utah, Nevada, and Arizona, and to uranium workers who joined the industry after 1971. The compensation fund is set to expire in 2022, so the legislation would also extend it to 2045.

The current RECA is woefully insufficient in scope to compensate all who suffered and continue to be impacted by the violence and contamination of the U.S. nuclear weapons program. Expanding RECA  is an essential step in reckoning with the radioactive legacy of the nuclear weapons complex and beginning to repair the harms and injustices nuclear bombings and uranium mining have caused.

Hearings were held in the House Judiciary Committee in March of 2021 and Senate Judiciary in 2018. If your Congress Members are on the Judiciary committees, ask them to actively move RECA from committee to the House and Senate floors for a vote -before the law sunsets in 2022. We need every Representative and Senator to actively work and vote to pass the Radiation Exposure Compensation Act.