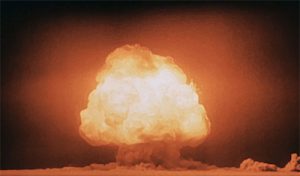 This week is the 75th anniversary of the first uses of nuclear weapons in warfare: the atomic bombings of Hiroshima on August 6, and of Nagasaki on August 9. The horrific suffering and loss of life continue to this day, even as the numbers of survivors—the Hibakusha—who lived to testify to the reality of nuclear warfare are dwindling. This year’s events and demonstrations are particularly important. They include protests at the United Nations, calling for ratification of the Treaty on the Prohibition of Nuclear Weapons. Nearly two-thirds of the world’s nations (122 countries) voted to adopt the Treaty in 2017, and 40 nations have ratified it—only 10 more are needed for the Treaty to go into effect.

While the attacks on Hiroshima and Nagasaki were the first acts of nuclear warfare, they were not the first time a nuclear bomb had been used—nor the first time civilians were the primary victims. And nor were they the last. It’s time to act on that, too.

The Manhattan Project conducted the test to confirm that the plutonium warhead to be used in the Nagasaki bombing would work. And they did it in ways that maximized the radioactive fallout. The warhead was packed with far more plutonium than needed, to make sure there would be a fission reaction. The bomb was detonated 100-feet above ground, so the nuclear explosion contaminated massive amounts of soil, lifted the radioactive dust and ash seven miles into the air, and rained it down throughout the Tularosa Basin and much of the Southwest. Most of the plutonium was dispersed as dust particles, making the fallout even more lethal in the long run: even the most microscopic particles of plutonium cause fatal cancers when inhaled or ingested.

The Tularosa Basin is a largely Native American and Hispanic community, on the territory of the Mescalero Apache. Residents have suffered from cancer and other radiation-related illnesses ever since. Yet, even though they are the first victims of the nuclear weapons program, they were excluded from a law enacted in 1990 to compensate people impacted by the nuclear weapons tests conducted in Nevada after World War II. Over $2.5 billion has been paid out since 1990, but not a dime to the people of the Tularosa Basin, nor to people in the Pacific Islands where the U.S. also conducted nuclear tests. The Tularosa Basin Downwinders Consortium has been fighting for 15 years to right that wrong.

NIRS supports their call for Congress to pass H.R. 3783, to amend the Radiation Exposure Compensation Act of 1990 (RECA). The House of Representatives has already passed a resolution endorsing the bill but has not actually moved to pass the bill. In fact, the House Judiciary Committee has not even held a hearing on it yet. This week, we urge people to take action in commemoration of the 75th anniversaries of Trinity, Hiroshima, and Nagasaki—including and especially by calling for the leaders of the Judiciary Committee, Chairman Jerrold Nadler (D-NY) and Ranking Member Jim Jordan (R-OH), to schedule a hearing on H.R. 3783 and to pass the bill, post haste.

The bill would amend the 1990 legislation to, finally, provide compensation and medical care to not only the victims of the Trinity Test, but also the residents of Guam and the Northern Mariana Islands, downwind of the U.S. tests in the South Pacific. The bill would also include uranium workers who began working in mines and mills after 1971. That was when uranium mines and mills in the U.S. started producing ore for nuclear power plants, not just nuclear weapons. Those mine and mill workers were working for the same companies, doing the same jobs, and have suffered the same medical problems.

It is time to abolish nuclear weapons and nuclear power. But ending the nuclear era also means we need to start healing the damage it has caused. Passing H.R. 3783 is a necessary next step. It is long past time to compensate the Trinity Downwinders and the other victims of nuclear weapons and uranium mining.