Over 240 organizations, including Friends of the Earth, Indigenous Environmental Network, Food & Water Watch, The League of Women Voters, Physicians for Social Responsibility, Public Citizen, Nuclear Information and Resource Service (NIRS), and hundreds more sent a letter to Congressional leaders telling them to reject all proposals in infrastructure bills that subsidize nuclear energy and to instead invest in a just and equitable transition to safe, clean renewable energy.

The letter opposes proposals in both the energy legislation for the larger reconciliation package (S.2291/H.R.4024) and the bipartisan infrastructure bill, which together would grant up to $50 billion to prop up aging, increasingly uneconomical nuclear reactors for the next decade.

The letter highlights climate, economic, and environmental justice concerns with proposed nuclear subsidies, in addition to evidence that nuclear power is too dirty, dangerous, expensive, and slow to be a viable solution to the climate crisis.

All of the proposed subsidies (up to $50 billion) are predicted to go to reactors owned by only eight corporations and located in only 19 counties across eight states. Over 50 organizations in each of these states – Connecticut, Illinois, Maryland, New Hampshire, New Jersey, Ohio, Pennsylvania, and Texas – signed the letter.

Tim Judson, NIRS executive director said that “Despite the size of this extraordinarily inequitable investment of taxpayer dollars, to subsidize old nuclear power reactors, not one single new job would be created. Worse, allocating $50 billion to old reactors instead of renewable energy, efficiency, and other clean electricity infrastructure would prevent the creation of more than 60,000 new jobs.”

The hundreds of organizations call for federal investments in a transition to efficient, renewable, clean energy technologies that can scale up as rapidly and affordably as possible to reduce emissions as aggressively as possible. Not only does nuclear energy fail to meet any of those criteria, investing billions of dollars in subsidies for old reactors directly funnels public investment away from environmentally just, equitable, and sustainable solutions to the climate crisis.

The letter states “We cannot perpetuate false solutions that prolong our reliance on dirty energy industries and have any hope of ending the climate and environmental justice crises those industries create. Providing billions of dollars in subsidies to nuclear power will only put short-sighted economic interests ahead of human lives, racial justice, the health of our environment, safe drinking water, and a thriving, equitable economy.”

The 240+ organizations demand that these bailouts be omitted from the budget and funds be directed to investing in carbon-free, nuclear-free clean energy. The Nuclear Information and Resource Service is an organization devoted to the just energy transition from nuclear to clean, renewable energy sources and advocates for a nuclear-free, carbon-free future. They are located near Washington DC in Takoma Park, Maryland. 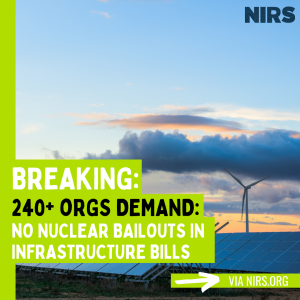